Undersea kelp forests like this one off the coast of California are among the most productive ecosystems on Earth. Protecting and restoring these habitats enhances carbon sequestration in the deep sea.

Macroalgae forests are among the most productive ecosystems on Earth. Protecting and restoring these habitats could enhance carbon sequestration in the deep sea.

Protecting 160–199 million hectares of macroalgae forests globally by 2050 could sequester 1.84–2.28 gigatons of carbon dioxide. Even with successful protection, some regions will experience degradation, so restoration is key to increase climate impact. Restoring 14–26 million hectares of macroalgae forests would enhance sequestration of 0.77–1.50 gigatons of carbon dioxide. Financials are not projected because they are not incurred at the landholder level.

Macroalgae are fast-growing marine plants. They store high amounts of carbon and are among the most productive organisms on Earth. Some of this exported carbon is sequestered in deep sea sediments. Although the ability of macroalgae to store substantial amounts of carbon for long periods of time remains in question, some have quantified the long- term carbon sequestration potential of macroalgae at 0.17 gigatons of carbon dioxide equivalent per year, exceeding the carbon buried in coastal angiosperm environments, such as mangroves, salt marshes, and seagrass beds (0.11–0.13 gigatons of carbon dioxide equivalent per year).

Macroalgae forests are broadly distributed throughout the global ocean, especially in temperate subtidal ecosystems. They provide habitat for fish and invertebrates. Globally, the area covered by macroalgae is decreasing 1.8 percent annually due to a combination of factors related to anthropogenic activity and climate warming. Marine Protected Areas (MPAs) and management actions such as protecting predators, minimizing harvest, and reducing eutrophication due to runoff can improve macroalgae forests’ resistance and resilience to climate change. Active restoration programs are also known to be successful, and more restoration sites are emerging worldwide.

For macroalgae restoration, the total area available is the current total degraded macroalgae area. We set current adoption to 0 and increase it to 198 million hectares by 2050.

​​We calculated impacts of increased adoption of the Macroalgae Protection and Restoration solution from 2020 to 2050 by comparing two scenarios with a reference scenario in which the market share was fixed at current levels.

We estimated carbon storage in protected landscapes at 4.6 metric tons of carbon per hectare based on 13 data points from six sources.

We did not model financials because costs are not necessarily borne by the landowner or land manager.

This solution was not affected by integration with other solutions because we assume it will be developed in ocean areas that do not have alternative uses.

It is difficult to quantify how much carbon would be sequestered by the Macroalgae Protection and Restoration solution under various scenarios due to uncertainty in the extent to which the remains of dead plants find their way into deep-sea sediments. We found no study that estimated the potential carbon benefits of protecting macroalgae forests. Krause-Jensen and Duarte (2016) estimated sequestration of 0.64 gigatons of carbon dioxide equivalent. Our solution shows a maximum annual reduction of 0.15–0.33 gigatons in 2050. Adjusting for the proportion of the total carbon sequestration potential that might be attributed to macroalgae forest protection based on our two adoption scenarios (about 25–50 percent), our values and those of Krause-Jensen and Duarte (2016) are in line.

Many of the  anthropogenic drivers of macroalgae destruction, such as eutrophication, harvesting, and fishing, can be addressed by local resources managers and may be ameliorated in part by protecting macroalgae forests in MPAs. However, even with the best efforts, some decline due to climate change is likely inevitable. This underscores the importance of also restoring habitat. 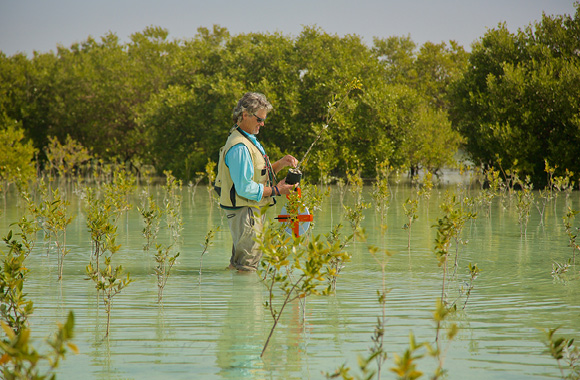 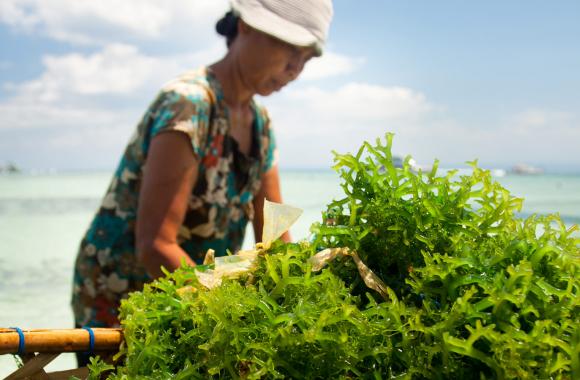