The powerful role of household actions in solving climate change

by Chad Frischmann and Crystal Chissell 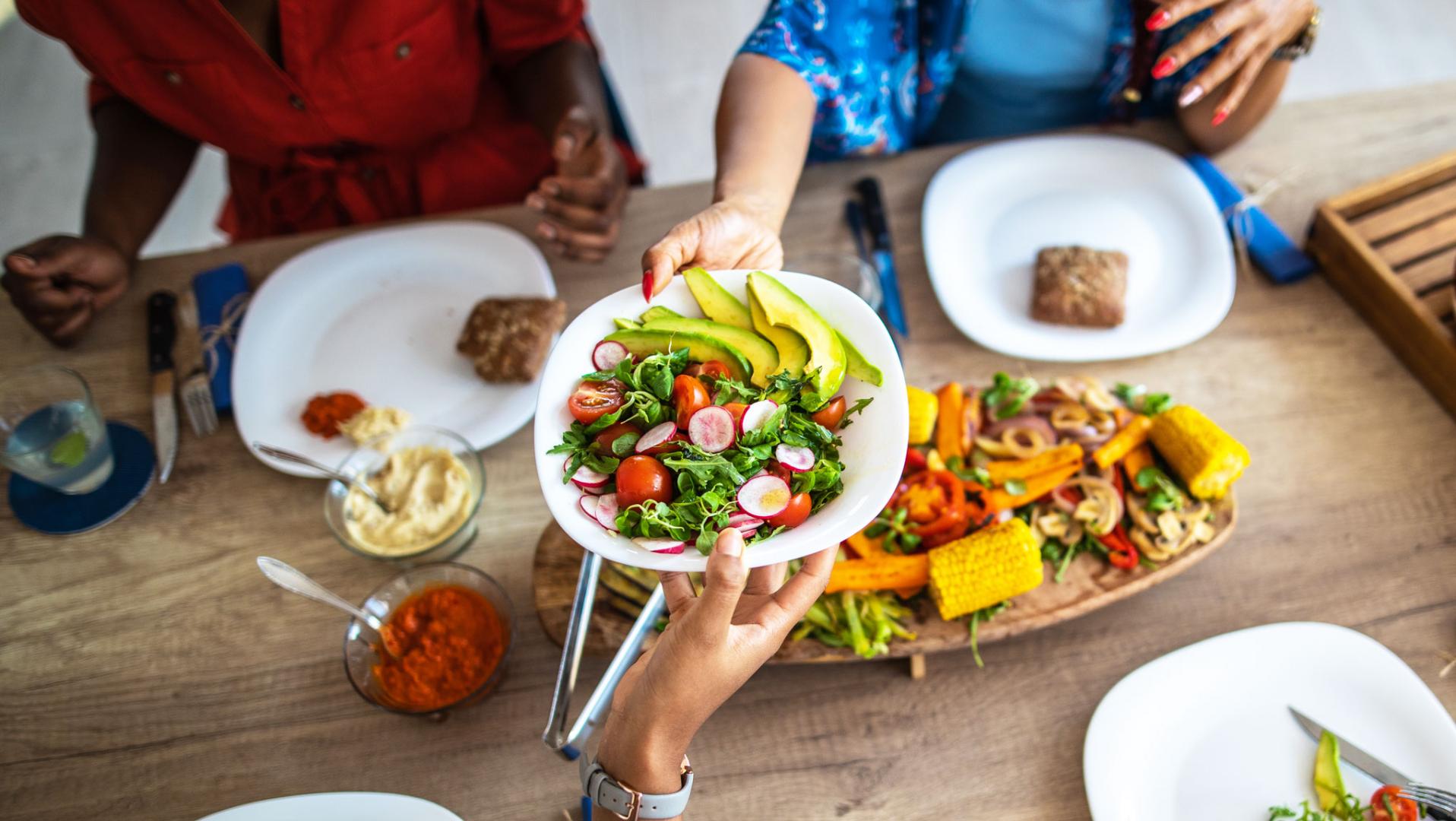 If you are a journalist and would like Project Drawdown updates and/or digital assets for editorial use, please contact press@drawdown.org.

Just as ripples spread out when a single pebble is dropped into water, the actions of individuals can have far-reaching effects. – The Dalai Lama

Everyone can play a role in solving climate change. There are real actions we all can take, starting today, to get us on a pathway to real system change that benefits humanity and the planet. The magnitude of the challenge we are collectively facing requires action from all levels—from our governments, businesses and institutions, communities, and every one of us in our personal lives and homes. So where do we start?

According to the most recent global surveys by Yale University on international public opinion on climate change, the majority or vast majority in all 31 surveyed countries say that they:

High-income countries in North America, Europe, and the Asia-Pacific region are home to a minority of the world’s population but have contributed the most climate-changing greenhouse gas emissions. Appropriately, citizens in those countries are more concerned than ever about their personal impact on climate change and are willing to change how they live and work, according to a September 2021 survey by the Pew Research Center. One challenge is that most of us are understandably unsure which actions are most impactful in solving climate change. Even individuals who believe they understand which actions are most impactful are often incorrect. As you join the climate action that is already underway, it’s important to understand which of your personal actions can have an impact. Fortunately, there is a science-backed, data-driven list of solutions that can guide you.

Drawdown Solutions, the solutions research arm of Project Drawdown, has led years of data collection and analysis by scholars around the world to identify and characterize more than 90 currently available technologies and practices that have a direct impact on greenhouse gases, are scientifically validated, and are economically viable. Results of this work were initially published in the New York Times best-selling book Drawdown and have influenced university curricula, city climate plans, commitments by businesses, community action, philanthropic strategy, and more. The foundation of Project Drawdown’s analysis is extensive and complex mathematical modeling that uses data from thousands of scientific sources to predict the potential of identified climate solutions to reach drawdown—the point when atmospheric concentrations of greenhouse gases begin to decline. This analysis and modeling tell us the impact these solutions have on the atmosphere, their bottom-line financial implications, their global applicability, and what beneficial co-benefits they offer to society and the environment.

Indeed, the Drawdown Solutions analysis reveals that individual and household actions have the potential to produce roughly 25–30 percent of the total emissions reductions needed to avoid dangerous climate change (>1.5°C rise). That is a lot higher than most people realize. It’s because we as individuals and households are a part of a broader economic system currently reliant on fossil fuels, from the food we buy, to the electricity we use, to the buildings we live in. While the vast majority of global emissions (70–75 percent) can be reduced directly by the decisions of those who run businesses, utilities, buildings, and governments, our choices as consumers, energy users, tenants, and voters have direct impact in their own right and can affect those decisions by sending signals across the system. So rather than being laden with blame and guilt, we should be owning our power to make change.

From the more than 90 specific, definitive, science-backed solutions Project Drawdown has identified, we have distilled a list of 20 high-impact climate actions that individuals and households in high-income countries can take and that together could reduce up to 25 percent of future greenhouse gases: 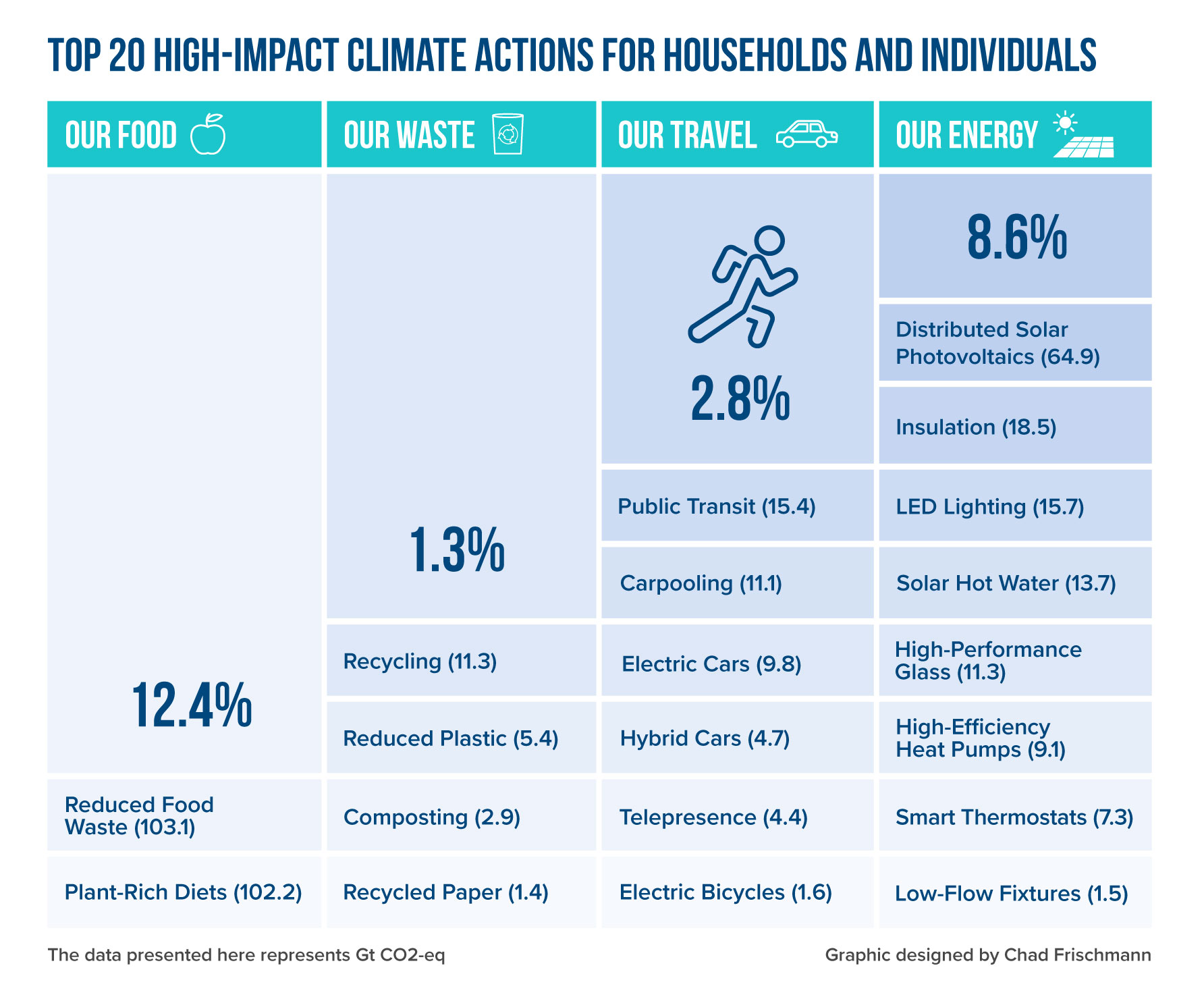 The science shows that change is needed throughout the system, and these individual actions play an essential role in the transition we need to solve the climate crisis. Indeed, the “code red” issued by the world’s top climate scientists this year (IPCC Sixth Assessment Report) shows that time is so short to prevent the worst impacts of climate change, this is an “all solutions on deck” moment for humanity. That means we need a massive surge of bottom-up momentum from individuals taking action together; forward-thinking, top-down decisions from policymakers to usher in the transition; and a middle-out transformation led by businesses, communities, and institutions.

Helping solve climate change is a collective act, and each of us has a set of levers for changing the systems around us. It’s not always easy, but everyone can make a difference. Our power grows when we work together with others. We are not just individuals, we are neighbors, friends, co-workers, employees, owners, investors, board members, officials, and representatives. Our personal contributions will be more powerful when we learn which solutions have the most impact and join with others in our communities to push for those from government, corporations, and other institutions.

Netflix's "Breaking Boundaries: The Science of Our Planet” and nonprofit Count Us In have partnered with Project Drawdown, ENGIE Impact, and Rare to collaborate on a new platform for individuals to identify the solutions that resonate most in their lives and calculate the positive impacts those choices make. This platform aims to align itself to the Drawdown Solutions model, and will continue to harmonize the underlying calculations.

Join this global movement and take a step now:

If you are a journalist and would like Project Drawdown updates and/or digital assets for editorial use, please contact press@drawdown.org.

Major businesses led by Etsy and eBay praise USPS’s shift to electric delivery fleet
A group of major corporations led by Etsy and eBay is praising the U.S. Postal Service (USPS) for committing to exclusively purchase electric vehicles starting in 2026, in a letter coordinated by Drawdown Labs, Project Drawdown’s private-sector testing ground for accelerating the adoption of climate solutions quickly, safely and equitably. Etsy and eBay are among the largest e-commerce marketplaces in the country. The USPS is central to their business and to millions of small sellers who run their shops on these platforms.  The USPS is currently transitioning to an all-new fleet of 106,000 delivery vehicles. It announced in December that 62 percent of those purchases over the next five years will have all-electric powertrains and by 2026, 100 percent of newly purchased vehicles will be electric. The letter from Etsy and eBay also includes signatories Askov Finlayson, Avocado Green, Ben & Jerry’s, Clif Bar, Dr. Bronner’s, A Good Company, Grove Collaborative, Patagonia, Peak Design, Seventh Generation, Stonyfield and Warby Parker. “This decision sends a message to every business in the United States: it is possible, achievable and necessary to adopt all-electric fleets for corporate transportation and shipping needs.” said Jamie Alexander, director of Drawdown Labs at Project Drawdown. “These companies are working hard to reduce their climate impact, and this move by the USPS enables them to address the difficult-to-abate supply chain emissions. This is good news for all involved. ” With a shift to electric vehicles, the group of companies believe it will not just be good for the environment but good for business as consumers reap the benefits of lower costs and other innovations made possible by electric vehicles.  The nation and the world are quickly transitioning to electric vehicles, led by consumer demand for the many benefits of EVs, including better efficiency, easier maintenance, zero emissions and better performance. That means cleaner air, reduced climate risk and improved health across the globe. Electrifying vehicles is a key climate solution, with the potential to reduce up to 9.8 gigatons of CO2-e by 2050. “For millions of small sellers and entrepreneurs on Etsy, a modern USPS committed to innovation and sustainability is crucial for the vibrancy of their small and micro businesses,” said Chelsea Mozen, senior director of impact & sustainability at Etsy. “The USPS’s commitment to a robust electric delivery fleet is good for the postal service, good for small businesses and good for America.” “USPS’s commitment to electric vehicles is great news for small businesses like the many on our platform who rely on USPS to keep their business moving. eBay is proud to support this move toward greater sustainability and a cleaner world,” said eBay chief sustainability officer Renée Morin.
Read more 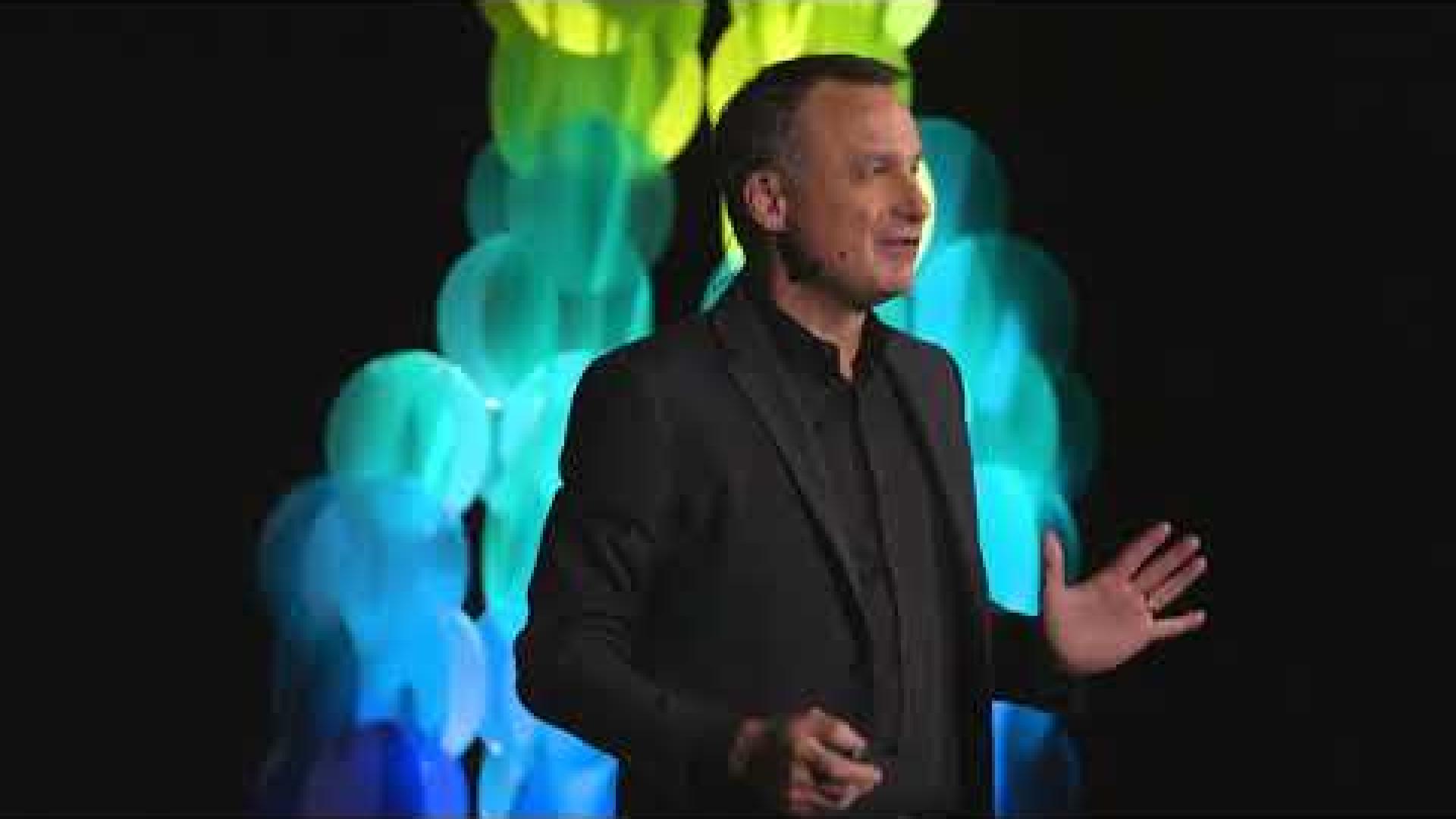 TEDxBoston: The Drawdown Roadmap
Project Drawdown has used rigorous science to identify and characterize nearly 100 practices and technologies that, if ambitiously implemented together, can achieve drawdown—the point when levels of greenhouse gases in the atmosphere start to steadily decline, thereby stopping catastrophic climate change.  Now, how do we scale them? The Drawdown Roadmap is a science-based framework to strategically and effectively deploy these powerful climate solutions in order to achieve net zero emissions by 2050. The roadmap takes into account how opportunity for reduction is distributed across sectors, the relative cost (or financial benefit) of the various solutions, and where and when each might most effectively be implemented. In this TEDxBoston presentation, Project Drawdown executive director Jonathan Foley introduces the Drawdown Roadmap and outlines how this new plan for prioritizing climate action across sectors, time, and geography can “really drive change on climate change” while there’s still time.  Watch “The Drawdown Roadmap: A Science-based Framework to Accelerate Climate Solutions" now.
Read more 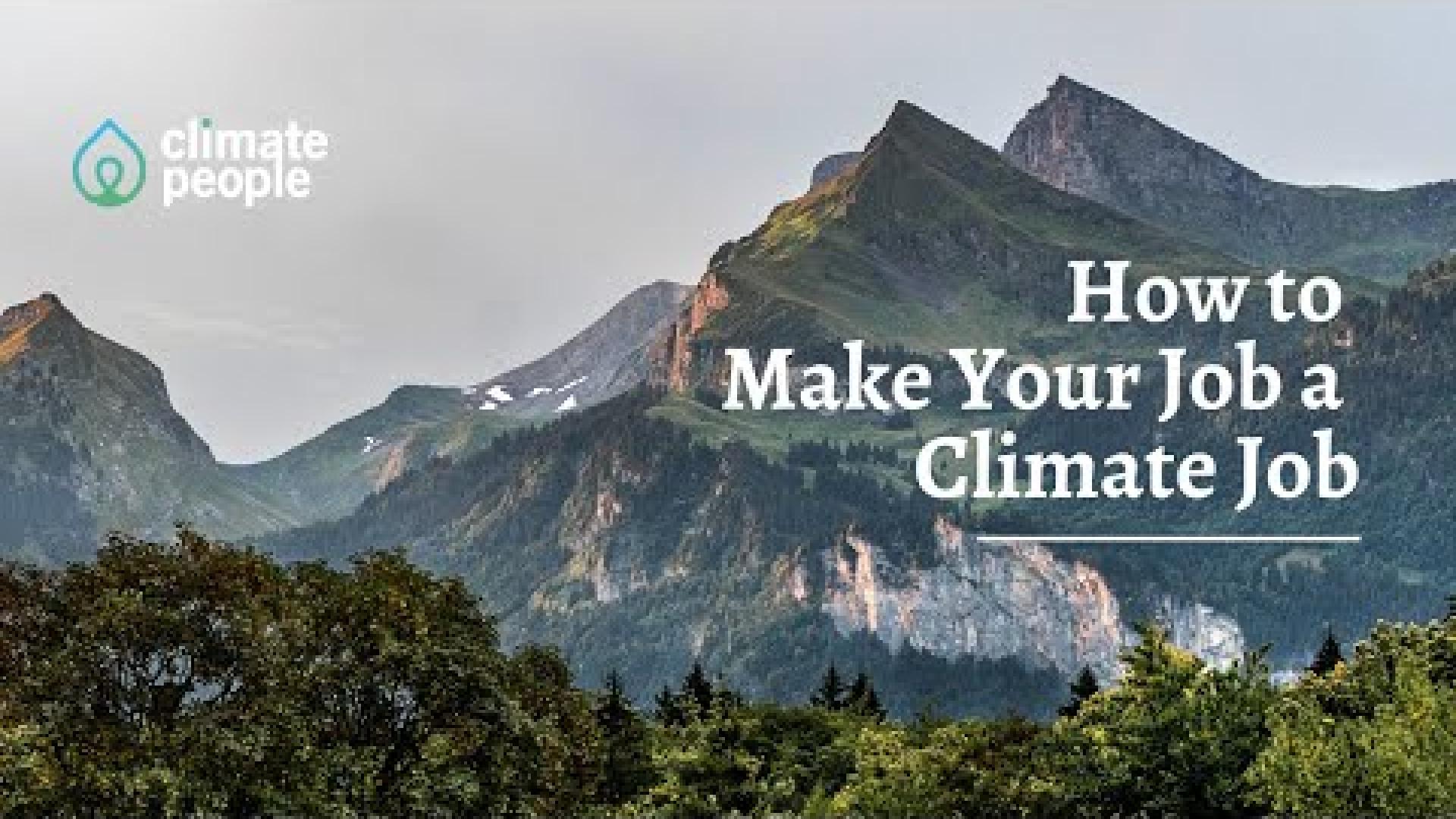 How to make your job a climate job
Would you like your work to help alleviate the climate crisis, even though "climate" is not part of your current position description?  In this webinar, sponsored by Climate People, presenters offer actionable advice on how you can reduce the threat of climate change, wherever you are and whatever you do for a living. Presenters: Aiyana Bodi, senior associate, Drawdown Labs Adam Braun, co-founder and CEO of Climate Cluib Ben Lai, senior software developer and employee Green Team lead at LinkedIn Kristy Drutman, co-founder of Browngirl Green
Read more
See All Insights