Small-scale biogas plant being built in central Vietnam. These simple plants can be built by local masons using materials such as bricks and cement

Small digester-stove systems that produce biogas from animal and crop wastes make it possible to cook with biogas instead of wood and charcoal, which have adverse health and environmental consequences. We project that by 2050, such systems can replace 57–87 million cookstoves in Asia and Africa, avoiding 4.65–9.70 gigatons of carbon dioxide equivalent emissions at a net first cost of US$24.72–51.59 billion. Adopting this solution at these rates costs US$100–209 billion more over the systems’ lifetimes than maintaining the market share at the current rate.

Anaerobic digestion is a biological process that produces from organic materials a gas (biogas) principally composed of methane and carbon dioxide. Methane digester stove systems capture the methane and burn it to create heat. This reduces greenhouse gas emissions from the use of fossil fuels or solid biomass fuel, while also mitigating fugitive methane and nitrous oxide emissions from the anaerobic breakdown of manure.

Project Drawdown’s Biogas for Cooking solution involves the use of technologies that produce biogas for household use through the anaerobic digestion of organic waste. This solution replaces fuelwood, charcoal, or fossil fuel-based cookstoves and helps mitigate their emissions. In addition to its climate benefits, it reduces the need for wood as a fuel source in cookstoves, thereby reducing forest degradation and time spent collecting wood, often by women and girls.

In the Project Drawdown model, the manure and crop waste fed into digesters is from the cattle and farm owned by the household so there is no fuel cost, but some maintenance is required.

This analysis used 2014 as a base year and focused on three regions: Middle East and Africa, Asia sans Japan, and Latin America. First, we forecasted total cooking energy for the included regions from 2014 to 2050s. Then we determined current adoption of Biogas for Cooking solution, defined as the amount of functional demand supplied by biogas for cooking in 2018, and forecasted future adoption based on the availability of digesters. Finally, we derived an emissions mitigation value and calculated emissions mitigation and costs relative to a reference scenario that keeps adoption of the Biogas for Cooking solution at its current percentage of cooking energy demand.

The total addressable market is defined as the total energy used for cooking in the Middle East and Africa, Asia sans Japan, and Latin America. We used a literature review to project population growth, average population per household, average household useful energy use for cooking per capita, a weighted average energy efficiency factor for stove and fuel type mix, and the percentage of the population using solid fuels. We then used these values, along with global data from the International Energy Agency (IEA, 2006 and 2012), to develop a composite global market for 2014–2050.

We created current and future adoption scenarios by taking the population of cattle, buffalo, and pigs as well as major crop waste by type (maize, paddy rice, sugarcane, and wheat) for each country in the Middle East and Africa, Asia sans Japan, and Latin America from the Food and Agriculture Organization (FAO)’s 2016 database; estimating waste production per day (minus a collection feasibility factor); then factoring in an average daily waste input requirement. The result was a total potential capacity for small methane digesters for each region.

We used current data on the number of installed digesters to derive current adoption figures of 32.5 percent, 0.3 percent, and 0.0 percent of the technical potentials for Asia sans Japan, Middle East and Africa, and Latin America, respectively.

We calculated impacts of increased adoption of biogas for cooking from 2020 to 2050 by comparing two growth scenarios with a reference scenario in which the market share was fixed at the current levels. We based potential for each region on the total potential capacity if waste from all animals and crops were used.

Note that capacity here is limited by availability of animal and plant waste, not by demand for cooking energy.

By avoiding methane, black carbon, and carbon dioxide emissions through the use of biogas for cooking that replaces inefficient fuelwood cookstoves, each stove reduced around 1.25–2.95 metric tons of carbon dioxide equivalent emissions per year (Zhang, Wang et al., 2013; Izumi et al., 2016). Because of leakages and biogas burning, emissions from small methane digesters amounted to around 0.02 kilograms of carbon dioxide per megajoule of cooking energy produced (Zhang, Liu et al., 2013). No substantial double-counting or integration effects were factors in generating the results for this solution.

All monetary values presented are in 2014 US$.

The cost of implementing the Biogas for Cooking solution depends on the country of installation, the size, the design, and the material used, and ranges from US$300 in Costa Rica to US$1,200 in Kenya. The operational cost of small methane digesters is very low because the manure is almost free of cost, but there is a need for regular maintenance. Maintenance costs range from US$0.01 to US$0.08 per kilowatt-hour (Ghimire, 2005; Shailendra et al., 2015). High initial capital costs, improper construction leading to high maintenance or repair costs, and inadequate operator training are the main barriers to large-scale adoption of small methane digesters (GACC, 2016).

We obtained most of the cost of traditional stoves from sources such as the World Bank and the US Environmental Protection Agency (EPA) and weighted costs based on cooking fuel mix. In our model, the manure and crop waste fed into digesters was from the cattle and farm owned by the household, so there was no fuel cost. However, some maintenance was required.

Under Scenario 1, carbon dioxide equivalent emissions are reduced 4.65 gigatons from 2020 to 2050 with a cumulative first cost to implement of US$24.72 billion. The operating costs over the lifetime of the stoves are US$100.20 billion higher than those for traditional stoves because traditional stoves have few financial costs, with women often collecting firewood over several hours per day for free.

Scenario 2 shows a mitigation of 9.70 gigatons from 2020 to 2050 with 87 million biogas stoves at a net first cost of US$51.59 billion. Lifetime operating costs are higher than the reference scenario by US$209.11 billion.

The Biogas for Cooking solution has the potential to mitigate climate change. The major risks associated with adoption are disrepair and fugitive emissions. Creative feedstock switching and community-scale aggregating are in development to increase the overall technical feasibility, which is currently the limiting factor for the technology. 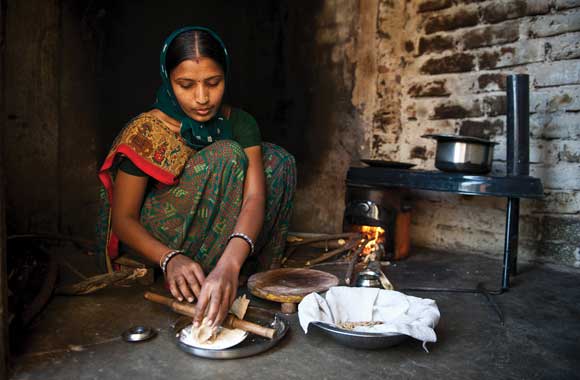